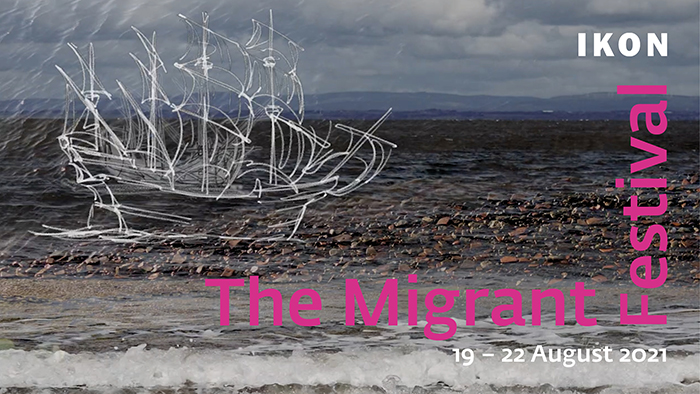 Ikon presents the third annual Migrant Festival. A four day programme mixing visual art, music, film and performance, it celebrates the contribution made by refugees and migrants to Birmingham and the UK, whilst bearing witness to the hardships and sacrifices involved.

This year’s festival is closely linked with Osman Yousefzada’s major new installation Infinity Pattern 1 at Selfridges Birmingham. The work is co-commissioned by Selfridges and Ikon, as is an instore exhibition and art trail which, along with new film, poetry and prints by Yousefzada, features the work of three Birmingham artists, Hira Butt, Farwa Moledina and Maryam Wahid, all informed by the experience of migration. Osman Yousefzada also curated Ikon’s first Migrant Festival in 2018.

Family workshop – Heirlooms of the Future
Friday 20 August, free
Choose from two sessions, 11am-12pm or 2-3pm
Brindleyplace Pop-Up Garden, Central Square, Brindleyplace
In this creative workshop join artists Margaret Murray and Kirstie Lewis to respond to Permindar Kaur’s work Fallen (1995), currently on display at Ikon. Families can experiment with a variety of textiles, sewing techniques and collage to explore culture and heritage, creating objects referencing the human form. In association with Celebrating Sanctuary Birmingham. This workshop is supported by Brindleyplace.

Talk – Osman Yousefzada in conversation with Sathnam Sanghera
Friday 20 August, 6-8pm, £5
Gran Café on 1 Selfridges Birmingham
Author and journalist Sathnam Sanghera discusses his new book Empireland (2021) with artist Osman Yousefzada. Through his writing Sanghera demonstrates how so much of what we consider to be modern Britain is actually rooted in our imperial past. It is only by stepping back and seeing where we really come from, that we can begin to understand who we are and what unites us.  This event is supported by Selfridges.

For more events see What’s On or read the press release.